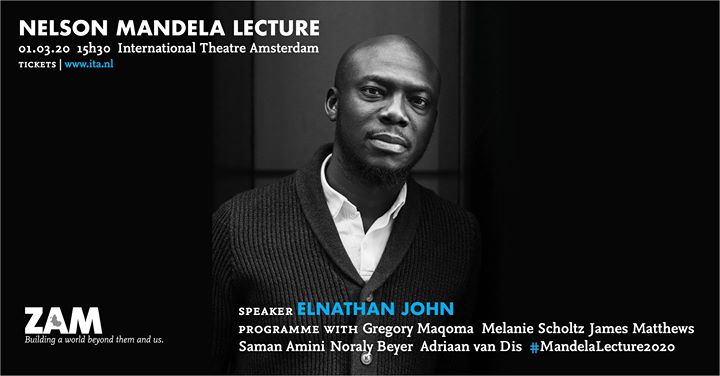 We are proud to annouce the speaker for the 2nd Nelson Mandela Lecture: Nigerian writer, satirist and lawyer Elnathan John (b. 1982). As a remarkable and dynamic voice, John is a multiple award winning author. His essays and blogs are published by The Guardian, Sunday Trust, Le Monde Diplomatique, The Economist, ZAM Magazine and Chimurenga Chronic amongst others. As an independent thinker and a witty critic of power abuse, oppression and self-aggrandizement, John is feared for his sharpness and admired for his courage and superb writing.

His first novel, Born on a Tuesday, was published in 2015 by Cassava Republic and translated into German and French, followed this year by Be(coming) Nigerian and, very recently, his first comic book in collaboration with Alaba Onajin: On Ajayi Crowther Street. Also in 2019, John was a judge of the Man Booker International Prize for Literature.

The logo of the lecture is with the artist’s permission based on Marlene Dumas’ Portrait of a Young Nelson Mandela.

Looking forward to welcome you on March 1st at the Nelson Mandela Lecture 2020!